The turning away of "20 French citizens (Gypsies)"

In 1954 some members of the Josef family who had survived the war tried to return to Norway. They were the first Norwegian Roma to try to return to their home country after the war, but were turned away as they had been 20 years earlier. The Norwegian family was prohibited from crossing the border from Denmark under the provisions in the 'Gypsy clause' in Norway's Aliens Act. After the Norwegian legations in Belgium, France and Austria refused to issue them with passports, they finally crossed the border between Sweden and Norway carrying false documents. This incident essentially marked the beginning of the two-year struggle to repeal the 'Gypsy clause'. 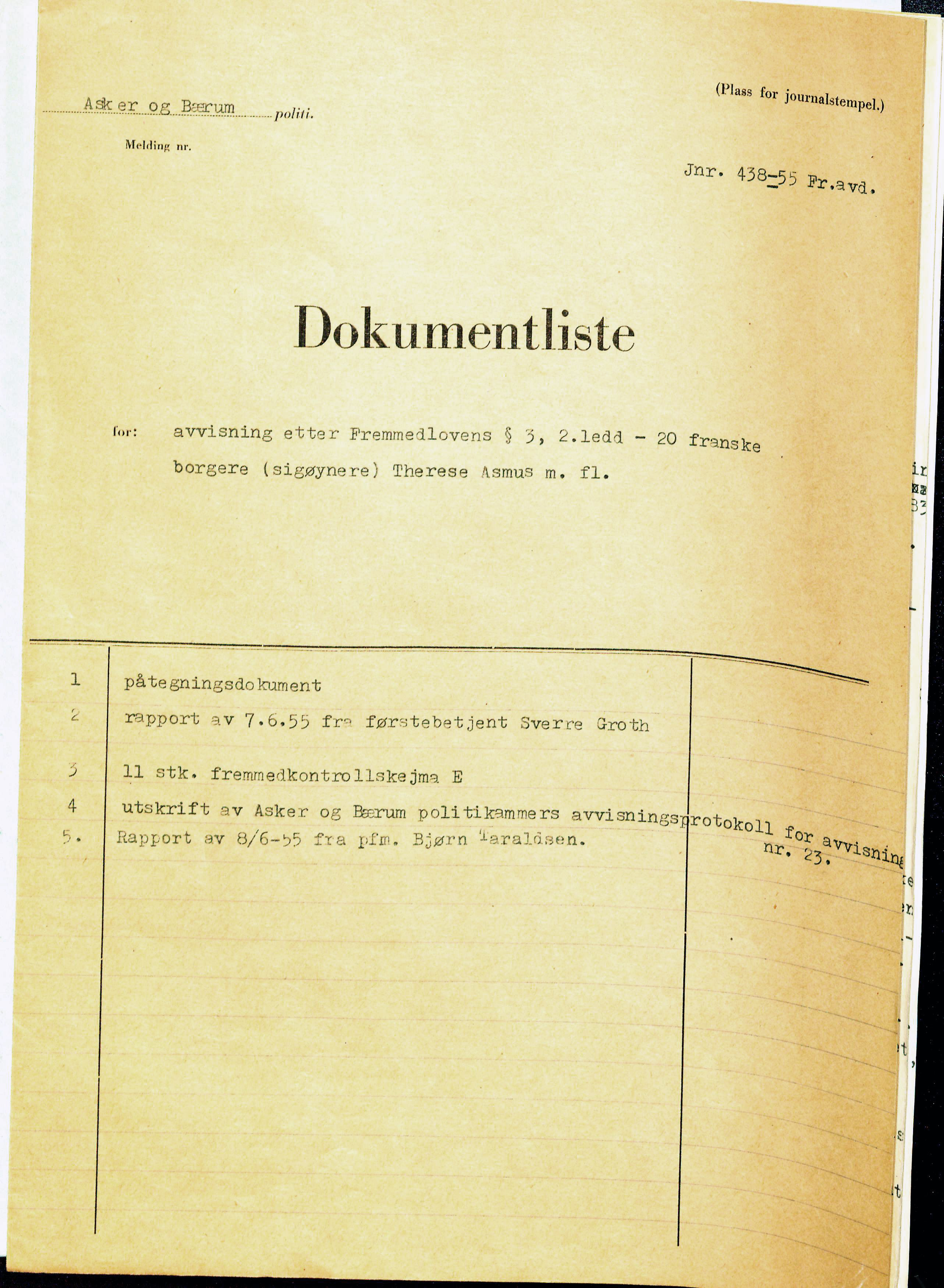 From the Ministry of Justice's list of documents concerning the decision to deny entry to the group of French Roma in June 1955. Ill: National Archives of Norway

Like the provisions in Swedish and Danish legislation banning Gypsies, section 3 of Norway's Aliens Act stood unamended for many years after the war. Nor did it take long before the Norwegian police began expelling Roma under the provisions of the 'Gypsy clause' for the first time since 1934. In June 1955 a group of French Roma travelling to a wedding were stopped at Fornebu Airport. Although the Ministry of Justice insisted that the group had been turned away because they were French vagrants, ministerial case documents specifically describe the group in brackets as being 'Gypsies'. The ministry's decision sparked renewed interest in the Josef family and the few other Norwegian Roma who had entered Norway the previous year. Already in July of that year, 14 Roma – most of them members of the Josef family – were summarily expelled from the country and sent on board a boat headed for Antwerp, Belgium. One member of the group turned away in 1934, Czardas Josef, was allowed to stay in Norway with his wife, but their daughter and four grandchildren were expelled.

The banning of the French group and the expulsion of the Josef family received wide coverage in the Norwegian press. But whereas before the war the press had criticised the Norwegian authorities for failing to enforce the 'Gypsy clause' and keep Roma out of the country, in 1955 many of the country's leading newspapers now called for the clause to be repealed from the Aliens Act and for the expelled members of the Josef family to be allowed to return home. On 9 June 1955 Dagbladet newspaper recommended that, until the clause was removed from immigration legislation, the Norwegian people should speak ‘softly about racial discrimination elsewhere in the world’.

The change of attitude in the press signified a shift in public opinion towards human rights and the rights of individual citizens in their dealings with the authorities. The amendments to the provisions in Danish and Swedish immigration legislation in 1952 and 1954 respectively signalled that the authorities could no longer enforce laws that explicitly targeted specific ethnic groups. In July 1955 Czardas Josef won his case in the Court of Appeal, and his expelled family members could return to Norway. The court's decision prompted a parliamentary debate over the 'Gypsy clause' and revision of the Aliens Act. Under heavy pressure from both the leading national newspapers and member of parliament Helge Seip, the Ministry of Justice finally repealed the clause in January 1956.

However, the question remains of whether the repeal of the 'Gypsy clause' was in reality rephrased to avoid having an Aliens Act that was patently racist. Many years passed before all those who had been expelled had their Norwegian citizenship reinstated, and in the Aliens Act the term 'Gypsy' was simply replaced with the term ‘vagrants, etc.' and still allowed 'foreign vagrants' to be turned away at the border.