Jeanne Galut-Modis was one of 66 Norwegian Roma who were deported to the 'Gypsy camp' in Auschwitz-Birkenau. Unlike most of the others, she was transferred to other Nazi concentration camps. Jeanne's prisoner card from Buchenwald shows how she was moved from one camp to the next from her deportation in January 1944 until the war ended in May 1945. Against all odds, she survived two internments in Auschwitz-Birkenau, and was one of the four deported Norwegian Roma to survive the war. 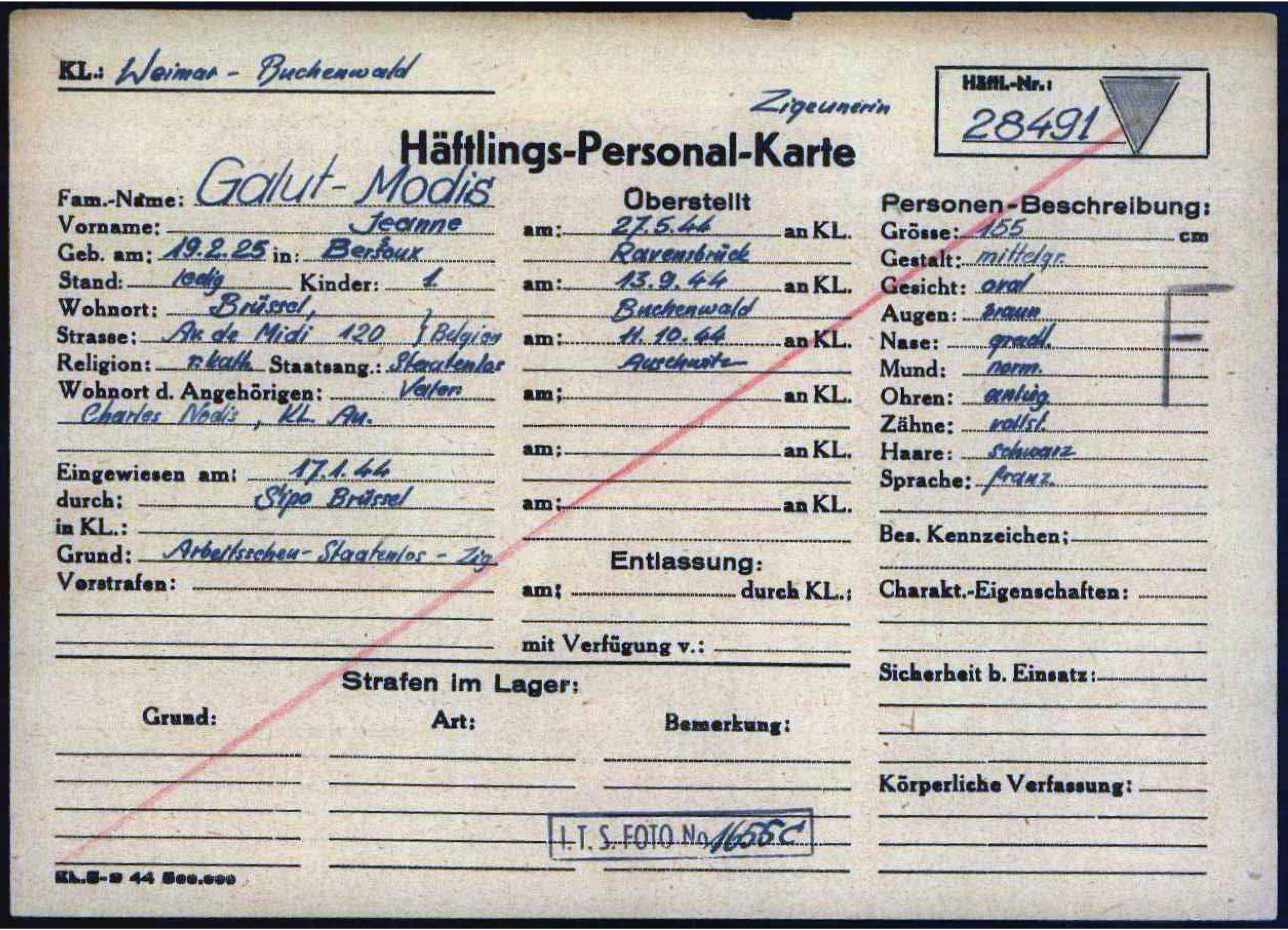 Jeanne Galut-Modis was the daughter of family head Karl Modis, and was deported from the Dossin internment camp in Mechelen to Auschwitz-Birkenau along with most of her family on 15 January 1944. In the prisoner register in the 'Gypsy camp' she was registered as a 'stateless Gypsy' and was assigned prisoner number Z-9771. Jeanne’s 18-month-old daughter Carmen was similarly registered on the same day and assigned prisoner number Z-9770. According to the register, Carmen Modis died around two month later, on 22 March 1944.

In April and May 1944, several selection processes were conducted on the Roma in Auschwitz-Birkenau. The young and healthy prisoners were selected for slave labour and sent to camps further west. Although the transport and the slave labour in the camps were exhausting, the chances of survival in labour and concentration camps likes these were far better than in extermination camps like Birkenau. Most of the prisoners selected were male, but some female prisoners were also selected and sent to Ravensbrück, a women's camp. According to the prisoner register, Jeanne Galut-Modis was transported on 24 May 1944 from Auschwitz-Birkenau to Ravensbrück, where she was registered three days later. From the end of July she was transported to various small labour camps that were under the administration of Buchenwald. Jeanne's prisoner card from Buchenwald suggests that she was registered as a prisoner in the main camp on 13 September.

On 11 October 1944, however, she was returned to Auschwitz. Most of the Roma who were returned to Auschwitz were no longer considered fit for work and were therefore often sent directly to the gas chambers on arrival. In September 1944 Jeanne's sister Sophie and nephew Voscho were returned from Buchenwald to Auschwitz as unfit for work, and were presumably killed on arrival. Jeanne Galut-Modis managed to survive her second internment in Auschwitz. By this time the 'Gypsy camp' had long since closed down, and she was therefore assigned a new prisoner number: 80659. Just before the Soviet troops liberated the camp, Jeanne was once again transported to Ravensbrück and remained there for the rest of the war.

By the time the war ended, Jeanne Galut-Modis had been registered and assigned prisoner numbers in four different internment and concentration camps, from Mechelen in the west to Auschwitz in the east, and had survived two stays in Ravensbrück and Auschwitz-Birkenau. She was the only member of the Modis family to be deported and survive, and together with Klara (Kall) Karoli, Milos Karoli and Stevo Karoli she was one of the four deported Norwegian Roma to survive.