"Expenses for transport of Gypsies"

The starting point for the report prepared by the Center for Studies of the Holocaust and Religious Minorities was the Norwegian authorities' denial of entry to 68 Roma in January 1934. In the days, weeks and months after the Central Passport Office and the Ministry of Justice denied the group of Roma entry to Norway, the group was made the subject of diplomatic wrangling by several countries, and the case was covered in several European newspapers. The final outcome of the dispute was that the group was left to an uncertain fate in Belgium, where they were far from welcome, and the Norwegian authorities felt obliged to pay Nazi Germany for its financial expenses in connection with having the group in the country. 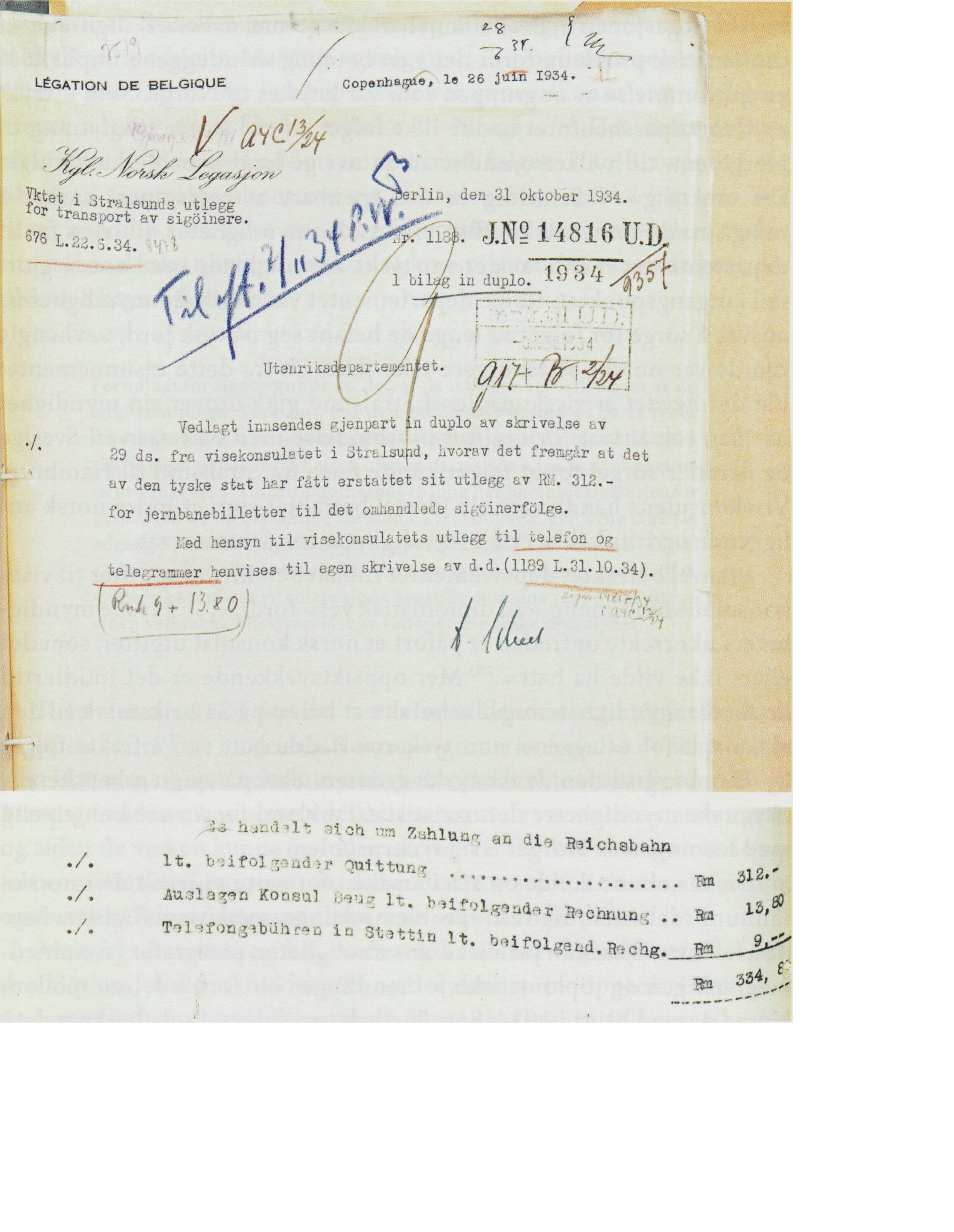 Caption: A record of the expenses incurred by the Norwegian consulate in Stralsund and the German state in connection with transporting the Roma group after they were denied entry to Norway in 1934. Illustration: National Archives Oslo

After the humiliating diplomatic submission to Sweden in the early 1930s, neither the Ministry of Justice nor the Central Passport Office was prepared to back down when sixty-eight Roma, most of whom were in possession of Norwegian identification papers, attempted to cross the border from Sweden to Norway in January 1934. A few weeks later, the group made a new attempt to enter Norway via Denmark and the Danish–German border town of Padborg. The Danish border guards turned them away, fearing that the group would become a burden to the country, since the Norwegian Ministry of Justice had issued express instructions that they were not to be considered Norwegian citizens.

On 22 January, the Danish newspaper Aabenraa Socialdemokrat described the decision to turn the group away in Padborg with the headline "Drabelig Zigeunerkrig ved Grænsen" (Formidable Gypsy battle at the border). According to the newspaper, the despair of some of the women was so great that the chief of police called up "between twenty-five and thirty officers from Graasten and Sonderborg" who "moved into battle against the enraged women". Shortly after the groups was turned away, family head Czardas Josef made the following statement: "Our group consists of fifteen men, seventeen women and thirty children. Most of us were born in Norway and are Norwegians. Even if we have to go back and forth a hundred times, we will do it in order to return to Norway. The way we have been treated is scandalous."

After a long dispute involving the Ministry of Justice, the Ministry of Foreign Affairs, the Norwegian consulate in Stralsund, the Norwegian legation in Berlin and the German authorities, the Norwegian government finally agreed to cover Nazi Germany's expenses of 312 reichsmark for transporting the group of Roma to and from Padborg. The group was subsequently detained in a hostel for the homeless in Altona before being interned in a newly established labour camp at Bahrenfeld. On 4 April 1934, the following announcement appeared in the Hejmdal newspaper: "In the camp, the Gypsies will be taught how to be decent and useful people. The men will perform productive labour and the women will be taught how to cook and clean." This case attracted attention not only in the Nazi party newspaper Völkischer Beobachter, but also in newspapers such as the Belfast Telegraph.

After the Gypsies had been a few months in the camp at Bahrenfeld, the German police dumped the entire group at the Belgian border, because Belgium had been their last country of legal residence. Despite attempts made over the following years by the Belgian authorities to get the Norwegian foreign office to grant the group Norwegian citizenship rights, the outcome of the rejection was that the entire group was practically interned on Belgian and French territory; countries where they were equally as unwelcome as in Norway, Sweden, Denmark and Germany.