In Racial Science in Hitler’s New Europe, 1938–1945, international scholars examine the theories of race that informed the legal, political, and social policies aimed against ethnic minorities in Nazi-dominated Europe. 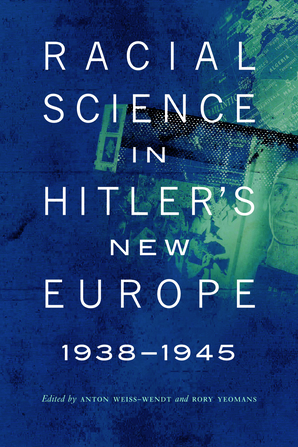 The essays explicate how racial science, preexisting racist sentiments, and pseudoscientific theories of race that were preeminent in interwar Europe ultimately facilitated Nazi racial designs for a “New Europe.” The volume examines racial theories in a number of European nation-states in order to understand racial thinking at large, the origins of the Holocaust, and the history of ethnic discrimination in each of those countries.

The essays, by uncovering neglected layers of complexity, diversity, and nuance, demonstrate how local discourse on race paralleled Nazi racial theory but had unique nationalist intellectual traditions of racial thought.

Written by rising scholars who are new to English-language audiences, this work examines the scientific foundations that central, eastern, northern, and southern European countries laid for ethnic discrimination, the attempted annihilation of Jews, and the elimination of other so-called inferior peoples.

Anton Weiss-Wendt is the head of the research department at the Center for the Study of the Holocaust and Religious Minorities in Oslo, Norway. He is the author of Murder without Hatred: Estonians and the Holocaust.

Rory Yeomans is the senior international research analyst at the International Directorate of the UK Ministry of Justice. He is the author of Visions of Annihilation: The Ustasha Regime and the Cultural Politics of Fascism, 1941–1945