The Soviet Union and the Gutting of the Genocide Convention

After the staggering horrors of World War II and the Holocaust, the United Nations resolved to prevent and punish the crime of genocide throughout the world. The resulting UN Genocide Convention treaty, however, was drafted, contested, and weakened in the midst of Cold War tensions and ideological struggles between the Soviet Union and the West. 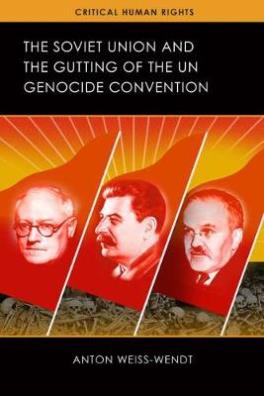 Based on extensive archival research, Anton Weiss-Wendt reveals in detail how the political aims of the superpowers rendered the convention a weak instrument for addressing abuses against human rights. The Kremlin viewed the genocide treaty as a political document and feared repercussions.

What the Soviets wanted most was to keep the subjugation of Eastern Europe and the vast system of forced labor camps out of the genocide discourse. The American Bar Association and Senate Committee on Foreign Relations, in turn, worried that the Convention contained vague formulations that could be used against the United States, especially in relation to the plight of African Americans. Sidelined in the heated discussions, Weiss-Wendt shows, were humanitarian concerns for preventing future genocides.