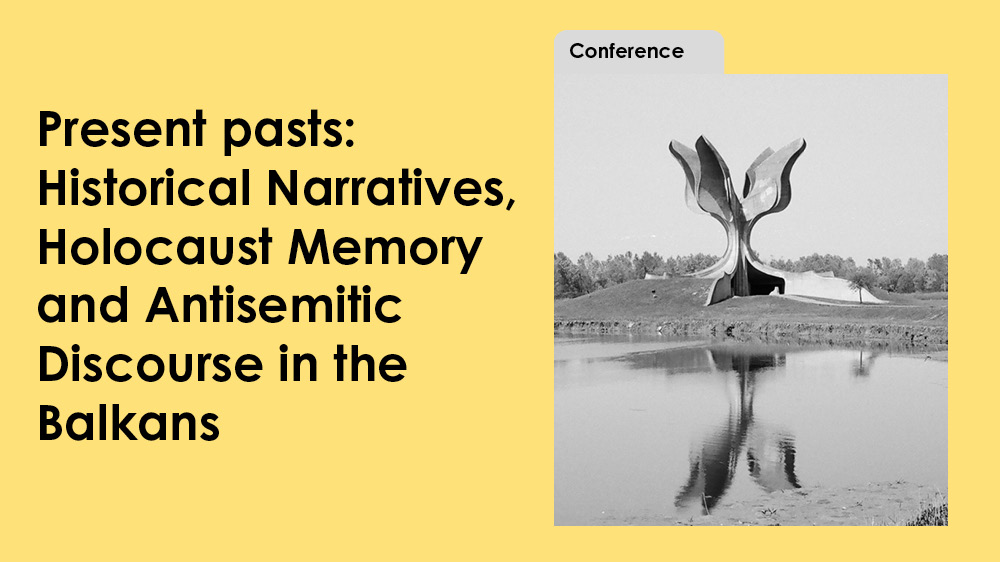 The conference "Present Pasts" at the Norwegian Centre for Holocaust and Minority Studies in Oslo gathers international scholars to discuss the impact of historical narratives, Holocaust memory and antisemitic discourse in the Balkans today. How are the historical narratives about Jews and the Holocaust in the Balkans intertwined with nation building, ideologies, and global trends today? What are the effects of the wars in the 1990s and what are the processes that have encouraged new waves of antisemitism? The conference is part of a three-year project on minority protection and mass atrocity prevention funded by the Ministry of Foreign Affairs.

Is the Balkans specific and why? Is the Balkans a helpful historical category in this regard? What are the consequences of Balkanism, or marginalisation in general? How are the historical narratives about the Jews and Holocaust in the Balkans intertwined with nation building, ideologies, and global trends? What are the effects of the wars in the 1990s? How are these developments reflected in digital and virtual anti-Semitism? The address will reflect on these questions in general terms, but also sharing insight from a recently completed manuscript on the Jewish refugees in the Balkans 1933-1945.

The Long Past and the Holocaust Remembrance in the Balkans

Only 17% of the Jewish population in Yugoslavia survived the Holocaust. More than 60.000 Jews were deported, killed or died of starvation or diseases. With the dismemberment of Yugoslavia, each newly independent country carried out the legacy of the Holocaust differently. This presentation tries to answer if and why the Holocaust remembrance matter, to whom, and what are the processes that encouraged new waves of antisemitism, showing the ways in which the Holocaust became entangled in various historical narratives and political discourses.

Working on being a Victim: Analysing Strategies of Self-Victimisation in Post-war Bosnia-Herzegovina

In December 1995, the war in Bosnia-Herzegovina officially ended, leaving behind a society deeply divided along ethnic lines. The findings of a qualitatively designed research project, which analysed the specific characteristics of the (social) construction of ‘self’ and ‘others’ in the post-war state suggest that the creation of a positive self-image is strongly connected with processes of self-victimisation.

National memory politics and cultures of remembrance have been increasingly influenced and shaped by the process of Europeanisation. However, EU norms of remembrance have also been exported and downloaded beyond the EU. The talk will explore how Europeanisation of memory is affecting the ways in which Holocaust is remembered and what are the benefits/consequences of Europeanised approaches to dealing with the past.

Remembering the contested past: Ustasha genocide in Serbian and Croatian public memory

The genocide against Serbs, Jews, and Roma in the Independent State of Croatia (1941-1945) represents the bloodiest, but also the most politically contentious episode of the Nazi occupation of Yugoslavia. The talk will discuss the main trends in the memory of the Ustasha genocide in contemporary Serbia and Croatia, and explore their origins, evolution, and interdependence.

In Albania, almost all the country’s native Jews survived the Holocaust, and the number of Jews was higher after the war because hundreds of Jewish refugees had been rescued from deportation. Israel has therefore honoured Albania as Righteous among Nations. The presentation discusses how the fact that Albania constitutes a “unique case” in Europe has become an emblem of ethnic Albanian exceptionalism.

The Serbian Orthodox Church and the Holocaust Memory: Beyond Liturgical Remembrance

Victimhood lies at the core of Christian liturgical remembrance. As a collectivistic religion, Serbian Orthodoxy puts the metaphysical martyrdom of Serbs in its mnemonic focus. By analysing the sources collected through multi-sited ethnography, this presentation identifies the SOC`s strategies of (inter)action in the multidimensional mnemonic interplay of the Holocaust memory.