International conference: The Exclusion of Jews in the Norwegian Constitution. Origins – Contexts – Consequences

The Center for Studies of the Holocaust and Religious Minorities is hosting an international conference on May 5 about the historical background, contexts and consequences of Article 2 in the Norwegian Constitution, which in 1814 declared: “Jews remain excluded from admission to the Realm.”

Time and place: International conference: The Exclusion of Jews in the Norwegian Constitution. Origins – Contexts – Consequences May 5, 2014 8:45 AM–4:45 PM, HL-senteret, Villa Grande 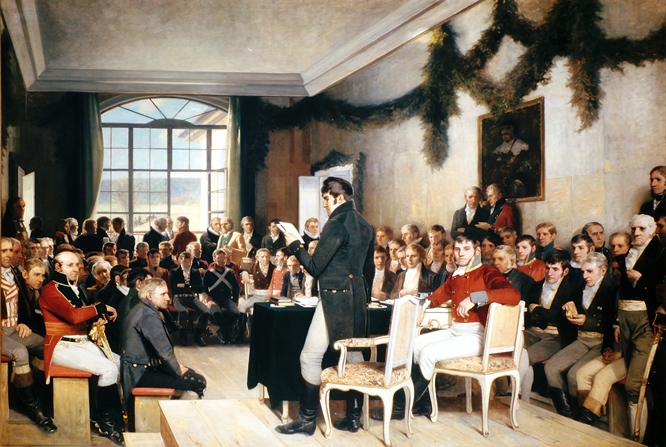 Today, the ban on Jews stands as something of a paradox because it seems to contradict the fundamental ethos of one of Europe’s most liberal constitutions. Nonetheless, the provision had such significance for the founding fathers at Eidsvoll that it was included as one of the eleven so-called fundamental principles.

The debate over the rights of Jews had been discussed in Europe since the early 1780s. To what extent were the founding fathers of the Norwegian Constitution party to this European debate? In retrospect, the decision to ban Jews from entering the realm has been presented almost as an act of impulse. However, the ban was in fact the result of long preparatory work. The decision was worked out by the Constitutional Committee, the members of which were among the most prominent figures at Eidsvoll and some of the country’s leading intellectuals.

09.00: The Politics of Jewish Emancipation in Europe at the Beginning of the 19th Century: Reinhard Rürup (Berlin)

11.30: Exhibition opening: Veien til paragrafen / The Path to Exclusion

- Introduction to the exhibition: Håkon Harket